The agents and staff of our Greenbrier office have a special way of celebrating Halloween – they do a pumpkin decorating contest.  The event, which is a decade old, is an office favorite and this year didn’t disappoint.  With entries that included pigs, ducks, and zombies, three agents were awarded top prize in three different categories.

Stormee Pettett won for most creative with her “Hamburger Pumpkin.”  Stormee used a real hamburger and a mini pumpkin to re-create the all-American classic in a fun new way. 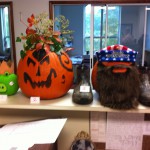 Cindy Clemens won for scariest pumpkin with her “Zombie Pumpkin.”

“This was the first year I’ve entered.  I was inspired  by my husband and business partner Frank [Clemens],” Cindy says with a laugh as she describes the pumpkin with a knife stuck out of his head.  Frank wasn’t available for comment.

For funniest pumpkin it was the official Diva of Greenbrier, Kimberly Kello-McBride and her “Duck Dynasty Pumpkin.” This pumpkin featured a beard, sunglasses, and boots.

“I’m a fan of the show and I follow trends. Duck Dynasty is very popular,” says Kimberly.

Kimberly has also inspired pumpkin decoration.  Several years back an agent decided to decorate a pumpkin in honor of Kimberly.