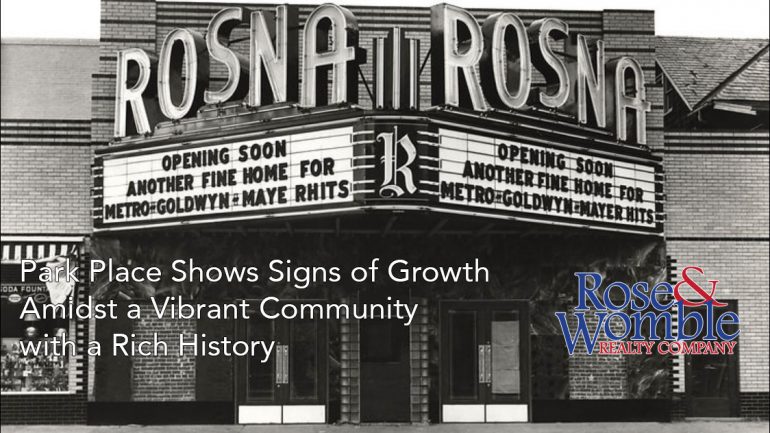 First listed as a National Historic District in 2005, The Park Place neighborhood long served as a cornerstone of the city’s commerce, art, and daily life of West Norfolk since its inception the 1890s.

Comprised of over 1500 contributing structures, the area is a prime example of the kind of streetcar driven suburban development that characterized much of Norfolk from the late 19th through the early 20th century. Bordered roughly by Granby Street on it’s east and Colley Avenue to its west, Park Place is made up of four primary subdivisions: Virginia Place, East Kensington, Park Place, and Old Dominion Place. Notable architectural trends include both Queen Anne and Shingle Style structures. A Wealth of Norfolkian History

The area came to prominence especially around the post war time, as many African American communities moved in from all over the city to take advantage of affordable housing prices situated around a bustling thoroughfare in the form of 35th St — which boasted not one, but two major theaters with the Newport (constructed in 1930 and finally torn down in 2012) and the Rosna (constructed in 1942.)

Many of the homes in this area are what’s known as “Craftsman” Kit Houses, the affordable nature of which fueled the expansion of the neighborhood. Park Place is one of the oldest zones in the city, and is situated between all major points of travel from Downtown to the Naval Base.

Sadly, like much of Norfolk, the area began to fall into decline as the 60s and seventies gave way to the 80s and nineties. Competing retail concentrated in the form of Military Circle and later malls combined with the rise of the freeway systems drew much of the money out of the neighborhood.

Today many of the original single family homes have been divided into small studios or mid-sized small apartments out of duplexes and stately Victorian buildings, and newly built residences are replacing empty lots and older structures at a rapid rate.

Folks in the know have pointed to the neighborhood as a hot-spot for local theater, literature, poetry, and music stretching back to the mid aughts. 35th Street is known all over the country for its black box theater named simply the Venue on 35th St. Founded by a small group of investors back around 2005 and led through the efforts of Patti Wray, who was highly involved with the Generic Theater as well. With Wray’s retirement, ownership of the space has transferred to James Cooper, another respected theater professional in the city.

The Venue has provided a home for a widely diverse group of artists, poets, and dreamers in the area — hosting the current longest continuously running open mic in the region each Monday, currently hosted by Spoken Word Artist Jorge Mendez. The neighborhood is also widely respected for the number of Hip-Hop artists who travel through from time to time, as well as some homegrown from its own streets.

The House of Consciousness has long operated on the street, serving as an educational bookstore centered around African-American activism. Across the way, a resurgence in true Southern Soul-food can be spied through the windows of Granny’s Country Cooking. The opening of Croakers Spot, a prominent restaurant serving breakfast / lunch / and dinner with an emphasis on seafood fare, signaled a rise in the neighborhood’s fortune to many.

Colonial Pawn Shop has provided an eclectic array of second-hand goods for as long as anyone can remember at the corner of 35th and Colonial Avenue. Further off, on the opposite boundary of the zone, Taylor’s Do-It Center provides easy access to all manner of the crafty, or repair-it-yourself minded as well as many professional contractors. To the south, one can’t speak of the revitalization of Park Place without mentioning the success story of Handsome Biscuit — a tasty breakfast spot that’s always packed. Toast Norfolk has served as something of a home for Josh Coplon’s LAVA Mini-Fests, bringing bands from all over to packed audiences — and the Thank You Gallery provides an excellent example of what arts-based institutions might look like as prosperity moves back into the area.

And, of course, there is the thriving O’Connor Brewing and the brand new Dead Reckoning Distillery, both on 24th Street, same as Toast.

Today, the neighborhood seems more thriving than ever, with much promise on a bright horizon.

If you haven’t made a visit in recent years? You’ll likely be shocked by how much is going on.