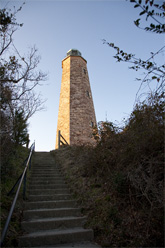 The Old Cape Henry Lighthouse, built in 1792, is the oldest lighthouse on the Chesapeake Bay and the third oldest still standing in the United States. The unpainted sandstone tower stands 90 feet tall and was reinforced with a brick lining. It serves as the official symbol for the City of Virginia Beach and is located on the grounds of Fort Story, a U.S. Army base.

The new Cape Henry Lighthouse was built to replace the old one in 1881. It sits only 357 feet away from the original and is the tallest cast iron lighthouse in the United States. The 164-foot octagonal tower has been operated by the U.S. Coast Guard since 1939.

During the early part of World War II, the top was used as a battery commander’s station for Battery Walke, which contained two 16-inch howitzers.

Although it is not open to the public, it can be seen from the original lighthouse. 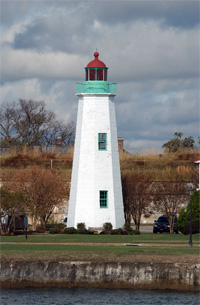 Located at Fort Monroe in Hampton, the Old Point Comfort Lighthouse is operated and maintained by the U.S. Coast Guard and not open to the public, yet it can be viewed from the street.

The keeper lives in an adjoining house owned and maintained by the Army since 1973. Overlooking the entrance of Hampton Roads and commissioned by Thomas Jefferson, it is the second oldest on the Bay, built in 1802.

It stands 54 feet tall and is an octagonal sandstone structure. During the War of 1812, it was used as a watch tower. During the Civil War, it was riddled with bullets by naval guns.