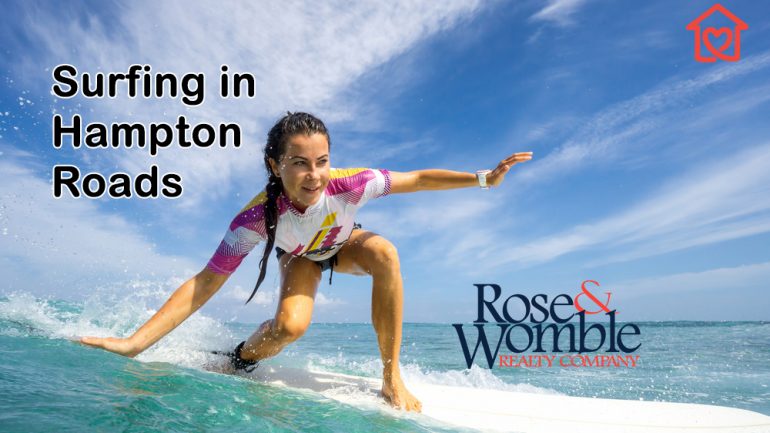 A Fresh Look at Surfing in Hampton Roads

Virginia Beach surfing is a bit of a conundrum. This area is not known for big swells and big names coming to the area. This is not a “typical” surfers’ destination.

However, if you head out to the 1st Street Jetty in Virginia Beach at any time of day — if there’s swell, there are surfers. Winter, summer, rain, snow, shine, the dedicated shredders are out there catching waves.

Some of the people you’ll see out there are true shredders with an immense love for the waves and water. People like Morgan Knight (female long boarder who I have a secret girl crush on and have never had the guts to talk to), Evan Michele, or Jordan Montgomery are out there ripping on the regular.

When I set out to write this article as a simple guide to surf spots in Hampton Roads, I thought I would just have a few spots to talk about, like the surf between 85th and 55th streets (known as the North End), 46th – 42nd Streets, 15th Street pier, 1st Street Jetty, Croatan, and Sandbridge in Virginia Beach, or a couple of hours down the coast to the Outer Banks.

Jordan is as inspirational as he is charismatic. He has a boyish smile with big blue eyes and wears a typical surfer’s uniform of t-shirt, rolled up docker style pants, bright orange socks and high top sneakers, all topped off with bleached blonde hair.I discovered something totally different along the process. What you may not know about is the understated and little known subculture of VB surfers who are deeply immersed in the arts. I had the pleasure of sitting down with one of these sunburn personalities, Jordan Montgomery. Jordan, 19, is a Hurley ambassador, a photo and video producer, and all around good dude. We talked all things local and a little beyond, his art projects, what he sees for the future of surfing in this area, and what he gained from growing up as a surfer here in our Hampton Roads area.

“It was a mistake — I let this girl do this and it looked weird so I had to go to a salon and get it fixed,” he assured me, regarding his locks.

Jordan grew up off of Shore Drive, and has been surfing since he was 8 years old. He caught his first wave in Chesapeake Bay with his dad (not typically a wave spot, but he was 8!). As he grew and fell more in love with surfing, he started surfing down at the North End, and eventually made his way to spots like Croatan, First Landing, Back Bay, and the infamous 1st Street Jetty.

Simultaneously, Jordan started playing around with video editing, also inspired by his dad. As his abilities in surf grew, so did his knowledge and understanding of video production. By the time he was in 8th grade, he had left the traditional school environment, and finished high school online, so that he could focus on surfing and developing his video and photography craft. By the time he was 17, he was already an intern at a digital production agency, was getting offers from around the world to go shoot surf videos, and recently took a big step and purchased a RED camera – a 4k image camera that costs as much as some cars. The purchase was inspired by one of his favorite surf films featuring one of his favorite surfers – “View from the Blue Moon” with John John Florence.

“Some people have car payments, or house payments,” he said, smiling. “I have a camera payment.”

In between video and photo production, Jordan spends his days hunting for waves around the area with his buddy Evan Michele, or out to Oregon Inlet in the Outer Banks. Neither he nor Evan would tell me the exact names of the spots, so as to “not blow up the secret gems.” (Anyone who has ever been enthralled by surfing knows the Virginia value of secret spots.) At those spots, he’s either on the wave himself, or off on the side filming his friends (like Evan, below).

“I used to always be in the water all of the time, preparing for the next competition, until I got hurt 3 years ago,” he chided. That was when the video and photo production scales tipped, and he’s perfectly happy with sitting on the sides, capturing beautiful sunset images on the dancing waves.

And though he’s only 19, he has a maturity, vision and clarity that some people don’t see in their lives till well into adulthood, if ever. He’s certainly on his way to becoming a prominent video producer in surfing and sports, he gets to travel the world to shoot videos, and he is finishing his online degree in Business Marketing so that he can start his own production company one day. All of this is due to his love for the waves.

“Surfing kept me grounded,” he said. “I had friends that I lost because of drugs. I never got into that. I would rather just go on a surf trip rather than spend money on other things. The biggest lesson I get out of surfing is accountability. It teaches you that. It’s on you. You own all of it.”

Quite a big perspective on life from a surfer from an area not known for its surf, right?

Jordan is inspired by Noah Snyder, an OBX local that got him into surfing bigger and more. He and Evan are associated with Eastern Surfing Association (Jordan’s mom is one of its leading members), a foundation dedicated to developing programs for healthy and active lifestyles.

Another fun fact about Virginia Beach surfing is the annual East Coast Surfing Championship, held each August down at the Oceanfront, right there at 1st Street Jetty. ECSC is one of the largest surf competitions on the East Coast, bringing in all sorts of people from everywhere.

The 1st Street Jetty is also home to the Steel Pier Classic held each May, which brings in a mixture of the arts and surf. Why is 1st Street Jetty so popular?

“You will always find a wave there,” said Evan. “If there’s swell, there is a wave.”

That being said, here’s what you need to know about surf in Virginia Beach:

Beginner Tips (from Jordan and Evan):

– If you’re just starting out, the North End is more your pace. 15th Street pier and 1st Street Jetty provide soft waves that are easy to catch, but they are typically crowded which makes them less beginner friendly. – Keep an eye out for a south swell.

– Bring a board with lots of volume, as it makes it easier to catch waves.

– Know the rules of surfer etiquette! Take a class before paddling out, understand the directions and who has the right of way. Know how to control your board on a wipeout or a failed paddle out attempt. Don’t be the dude out there dropping in on everyone on your first go!

– Get familiar with the spots. Stay on the North side as you’re starting out. For more experienced surfers, head down to Croatan and Sandbridge areas (much more open space, but also much more chance of getting caught in the rip.)

– Get your swim on. Virginia Beach is deceptive…it can seem small, but there’s an energetic rip that pulls just beyond the jetty. Be prepared!

Getting In On The Local Action Outside Of The Water Wave Riding Vehicles, or better known as WRV, is the arguably leading surf shop in Virginia Beach (strong competition with 17th St Surf Shop). 2017 is the 50th Anniversary, and the shop has gone back to the old school retro set up from their beginning days. Walk in there now, and you’ll have a nostalgic beach vibe immediately, with a true show of surfboards, surrounded by a large and eclectic selection of skateboards. WRV has everything you need to get you started in your surf endeavors. The pros in the surf shop can get you set up on your first shred stick, or can guide you into a rental for your first trip. They also host surf camps for the young ones (grommets!), but you can certainly find someone to give you a lesson or two – just ask the guys in the pro shop about details. Rentals run about $15 a day, and new boards start at $425. WRV also has a decent selection of second-hand boards, ranging from $150 – $300. Almost all boards sold at WRV are made by local shapers. Surfrider Foundation is a worldwide non-profit dedicated to protecting the world’s oceans. The Virginia Beach chapter leads beach clean-ups, holds meetings with volunteers to discuss plans around the ever eroding area, and how to go about dealing with the dredging of the beaches, which effects the sandbars needed for surfing, as well as the eco-development in the area. It’s easy to volunteer! Visit VB.Surfrider.org to learn how you can help.

Zeke’s Beans and Bowls, Commune, CP Shuckers, Three Ships Coffee, 17th Street Surf Shop… the list of businesses around the beach is just growing and getting stronger. Cruise on over to The Artists Gallery to check out some local works, and stop by Back Bay Brewing for a cold one.

For bigger swells and surf, head down the coast about 70 miles to the Outer Banks, or OBX. While we can’t blow up the spots, you’re sure to see some Virginia Beach locals out for a surf at any breaking beach. The islands have coast lines for miles, so you’re guaranteed to find something for your frothy needs.

Surfing is undoubtedly one of the most fun activities any human can partake in. Even if you spend the entire session just trying to paddle out, the moments when you are in the water, confronting Mother Nature in all her glory…those are the moments to live for.

This summer is a great time to get out there! With all the rain we’ve had, there are some good storm waves rolling through. Grab a board, grab a friend, wave to a local, support the community, and most of all…enjoy!