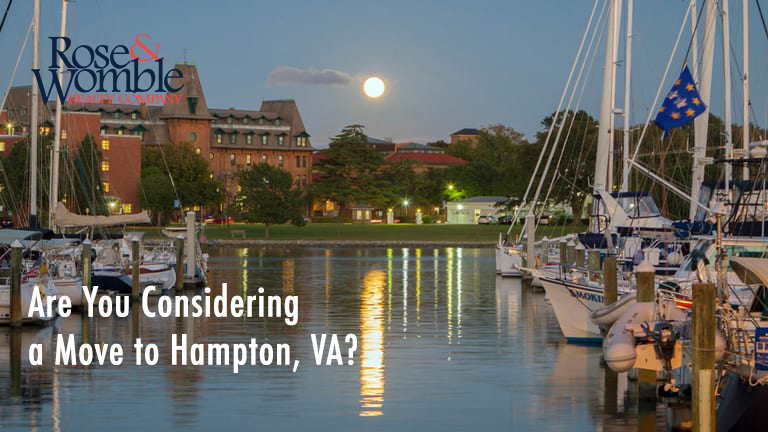 Are You Considering a Move to Hampton, Virginia?

This 400-year old city has played a vital role in America’s past. Hampton is laden with preserved architecture, historic landmarks, and museums that chronicle the city’s integral part in history. Hampton has a mild climate with ample rainfall and its location, fortunately, keeps it out of the path of most hurricanes and tropical storms. Year-round temperate weather, access to relaxing beaches and waterfronts, and affordable living costs make this city a great place to relocate.

If you are considering a move to Hampton, please read on for more information so that you can decide if it is the right place for you. Hampton has a mild climate. The region receives considerably ample rainfall–an annual average of 47-inches, and its location fortunately keeps it out of the path of most hurricanes and tropical storms. Summers are fairly hot and sticky with cool evenings, and winters are mild with very scarce snowfall–only about six inches each year.

Neighborhoods
The city has a number of historic neighborhoods, such as Aberdeen Gardens and Wythe, which feature charming architecture and a number of landmarks listed on the National Register of Historic Places. The very old neighborhood of Buckroe Beach features a large pavilion with live performances, food vendors and ice cream parlors. You can relax in the sand, fish, or rent paddleboats and kayaks in this charming community that attracts many visitors.

Schools
If you are relocating with children, it is important to research the school system in any city you choose. Public education in Hampton is served by Hampton City Public Schools. It is comprised of over 30 facilities educating 20,700 students from grades pre-K to 12. The city is also home to a variety of private and parochial schools, such as Hampton Christian School, Calvary Classical School, and Gloria Dei Lutheran School.

Employment
If you are planning a relocation to Hampton, you will want to find out more about the city’s main sources of employment. About 80 percent of the economy in the Hampton Roads region is derived from the federal sector. The area has a significant military presence, as well as facilities for NASA and the Departments of Energy, Transportation, Commerce and Veterans Affairs. The Hampton Roads area has the largest number of military bases and related facilities than any other metropolitan area in the world.

Living Costs
The cost of living in the city is about three percent below the national average, with housing being the most affordable amenity. Rent and real estate rates in the city are about 16 percent less than the average American city, and ten percent lower than the state of Virginia as a whole. The median home price in Hampton is $130,500. Groceries are three percent lower than average, and transportation is six percent lower. Healthcare is just one percent less than the national average. On the other side, goods and services are about six percent higher than average, and utilities are nine percent above the mean.

Culture and Contemporary Life
Hampton was founded in 1610, and has a rich heritage preserved by its abundance of historic architecture and landmarks. The Hampton History Museum features photographs and exhibits chronicling the city’s past and significance in America’s evolution. You can also learn more about the city’s role in the Civil War at the Fort Monroe Casemate Museum, and enjoy art, historical items, and artifacts from African-American and Native cultures at the Hampton University Museum.

If you’re looking for leisure, Buckroe Beach is a beautiful, clean stretch of sand with fishing piers, a playground, and peace and quiet! Unlike the tourist-filled shores of nearby Virginia Beach, this Hampton waterside neighborhood is perfect for those looking to spend a relaxing day on a small, private beach. You can also board the Miss Hampton Cruise ship to take a guided a tour of the Hampton Harbor and Chesapeake Bay–view the sites of the Battle of the Monitor and Merrimac, the historic Civil War island of Fort Wool and the warships at the Norfolk Naval Base.