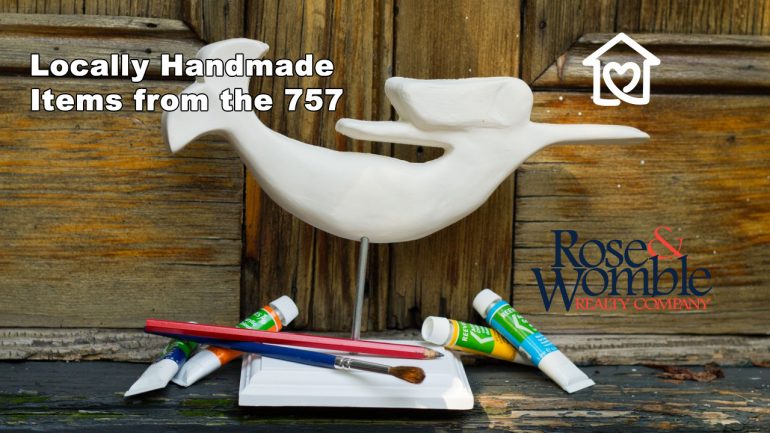 Locally Handmade Items from the 757 that make great gifts

Hampton Roads is blessed with an embarrassment of riches when it comes to folks with the creativity and the grit to shape ideas into solid substance. Some do so in order to start a trade. Others are possessed of the drive to actually hold art in their hands. To turn it from one side to the next, that they might examine the facets of creation on an intimate level. In a digital age, there’s a certain joy to watching crafters take tools in hand, gathering materials to seek out from what dreams may come.

Here, we take a moment to salute the builders. The crafters. The artists and the imagineers. Those who make. Our city is a far brighter, more fascinating place for their efforts. Some of these you can buy. Some of them you can see. And some, exist merely for the sake of the idea.

Make your own Mermaid.

After multiple attempts to find Norfolk mermaid gift items for departing friends and visiting family, Robert and Elaine took the matter in to their own hands… literally.  Chloe, visiting from Kentucky, fell in love with the mermaids.  A parade through Norfolk, complete with filmed poses with each swimming beauty, led them to the craft store and a block of clay!

From there were born the first mermaid prototypes…now available as blank canvasses for your personal creation, or choose one of their many hand painted designs.  All mermaids and dolphins are hand-made in Norfolk of durable casting plaster and easily embellished with non-toxic acrylic paints, glitter, fabric, shells, rhinestones, charms or whatever your imagination holds.

For history on the City of Norfolk Mermaids… please visit here: Founded in 2013 by Canadian native but current Norfolk resident, Miki Ross, Analogue Arts + Trade has become the de facto life support system for local photographers who still work with film. The emerged from a chrysalis this past June into a non-profit with the goal of expanding their portfolio towards community outreach and education centered around film photography, operating today as a collaborative co-op.

While they’re most known for selling and processing film, one of their favorite processes to engage in is the vintage art of producing Tintype photographs. What is a Tintype, you ask? Think of the old-timey photographs that look like they were printed on copper. Tintypes were widely used throughout the middle of the 19th century, but can be found at Analogue most often during the Halloween season.

Analogue – A short documentary about the dying art of film development from Doug Fraser on Vimeo.

Handcrafted Axes to Soothe (or Rock) the Savage Beast.

Sam Haga custom builds acoustic, electric, and bass guitars out of his Colley Avenue shop from carefully selected tone woods. Taught to build acoustics from famed local luthier Brian Hawkins, Haga is also a partner in a local production company, Electroganic and he plays bass for the Instrumental Surf-Rock band — Lucky 757. These guitars are beautiful, and you really need to hold one in your hands to feel the craftsmanship he’s imbues each instrument with.

One of a Kind Motorcycle Helmets.

A skunkworks project is an endeavor developed by a small, freewheeling group of people who do what they do primarily for the sake of finding new ways to do it. It’s unclear in Darryl’s case whether this refers to a business or is simply a whimsical label for a hobby, but either way some truly amazing hand-painted helmets have been finding their way out in the streets with his outrageous design sense and signature use of color. This is a man with a storied history in our fair City of the Cannonball, having been prominently featured in the definitive film on our music scene, “Hardcore Norfolk: A Story of Rock ‘n’ Roll Survival” for his work with bands like Combine and The Crimson Electric. Most recently he’s known as the primary organizer for the Norfolk run of the Distinguished Gentleman’s Ride, a charitable event to raise awareness and funds for prostate cancer research.

Yes. You heard me right. Shipping pallets. Jared Buckland has mastered a process to transfer photographs and art onto wood reclaimed from these most humble objects. Every one of his custom pallet-photographs goes through a 28 step process that results in a vibrant, made to last art object.

Glass Doppelgangers and other Curiousness.

Betty Gowans is a performance artist and sculptor who regularly works through handcrafted glass art objects to create compelling narratives on the nature of self and human relationships. She was awarded a solo exhibition at the Offsite Gallery by the Norfolk Arts Council in 2017, and has since followed up with two more solo shows. The last one, titled: Pith, was held at the Fawn Street Studios where she created an thermoplastic replica of herself. The process was intensely time consuming, claustrophobic, and fraught with the peril of failure — but in the end viewers were able to look on as she sat across from a glass shadow of herself. During the 2017 Neon Festival she featured her performance art piece involving replacing her head with cubed mirror.

Whatever you can think of.

Coast DIY Bar is a DIY Workshop, Craft & Sip, Craft Studio, Hangout Spot, Event Space, and any number of other descriptors you want to call it. Their mission is to create a fun space for all kinds of artists – beginners to professionals, creative to creatively challenged – to come together and express their creative sides. Their projects have been designed with a coastal flair but can be tweaked to accommodate your own passions or decor style.  They have worked hard to source their projects, where possible, from local and US companies from Hatteras, NC to Wisconsin.

They also have a small retail section where you will find small batch, locally sourced Coastal items, premium DIY supplies to support your habits as well as Coast DIY jewelry that can also found on their Etsy Store.

Whether you’re looking for creative inspiration or just a night of fun –  Come to the Coast!

PlantBar began as a plant importing business back in 2011. They supplied Amazon, Zullily and Terrain Garden Centers with air plants and terrarium supplies. Bailey Ryan decided she wanted to do something public facing and began offering terrarium workshops in the warehouse. Soon the classes grew to over a 100 people a session and we were offered a pop up location at Town Center in Virginia Beach. Stencil & Knot™ is a locally owned boho vintage home decor boutique and do-it-yourself design studio in Ocean View, Norfolk, Virginia. They specialize in curated vintage finds, modern home decor, furniture refinishing, upcycling, handmade DiY classes and tasting workshops to personalize where you dwell. Whether you just purchased your first home, your forever home, or just for the next few years home; they want to help you curate your space and make it your very own.

There’s a rich history and culture in our area centered around self publishing and hand-publishing. Twenty years ago, local poets would sustain their craft through late night labor in copier shops, cutting, pasting and stapling chapbooks to offer up as product after readings. The activity generated by these efforts fueled entire scenes: The West End Cafe, Casablanca Cafe, and Urban Safari, just to name a few. In recent years there’s been an explosion of auteur produced comicbooks through efforts such as 757CCC — a loosely organized group of with artists like Kevin Copeland, Kristin Mehaffey, Sarah Glaser, and Willie Cordy contributing work. The Norfolk Zine Fest run by Jerome Spencer two years running has provided a space for zines creators to raise awareness of their production.

A growler is a jug designed for the express purpose of taking home tasty draft beer from your favorite brewery. Renown ceramic artist and local, Richard Nickel, founded this company to produce durable, high-quality growlers fashioned from stoneware clay which is fired in a kiln. His work is designed to last a lifetime, and every one purchased is made directly at his hands. Custom numbers are available which can include company logos and slogans using ceramic decals which become a permanent part of the vessel once fired on. The company keeps a studio over in Park Place for easy viewing of their offerings.

Hand-stitched Beasties, Belles, and Beyond

Lindsay Cristelli founded Silent Orchid Studio back in 2009, focusing on hand crafting “creepy-cute” plush toys, art dolls, and mixed media illustrations. Her work is rife with references to old horror films, fairy tales, vintage illustrations, and more. In 2016, she and her husband, Justin — himself a comic creator and author of the long running series, “Red Knight,” enjoyed great success with a horror-parody of “Elf on the Shelf” called: Krampus in the Corner. Silent Orchid Studio’s offering can be found on Etsy as well as at many of the local craft fairs and comic conventions across the state.

Hampton Roads is home to a wide community of scooter enthusiasts who make truly remarkable machines. This isn’t a business. Really, it’s only a group by the barest definition of the term. They transform standard, stock bikes into a canvas wherein they weld and wrench works of pure magic. These aren’t no Bird Scooters, these bikes have been tuned to the point where engines that were once only capable of twenty-five, thirty miles-per-hour are now straight beasts pushing metal and man in excess of sixty, seventy, and even eighty miles per hour. You’ll hear them coming, too. Loud and proud.