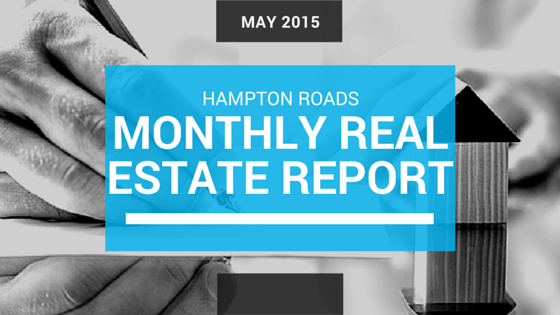 Real estate is still moving up, both nationally and here in Hampton Roads. Here are some of the highlights from our monthly market report:

According to the National Association of REALTORS®’s April Housing Report, existing-home sales are slowing down due to a lack of inventory available in the marketplace. Home sales did rise 6.1% in April over the previous year, but the projected annual rate of homes fell 3.3%.  NAR says this is directly due to the lack of home inventory as many potential sellers are uncertain about putting their homes on the market. Nationally prices continue to increase year-over-year, rising 8.9% over April 2014. This was the 38th consecutive month of year-over-year price increases.

Nationally 40% of homes sold at or above their list price, a sign that bidding wars are making a come back.

However, here in Hampton Roads, the average list price for a home in April 2015, was $149,218 but the average sold price for April 2015 was $142,276 – almost 5% below the list price. Sellers need to be aware of these trends and price correctly for their neighborhood.

For what is specifically going on in your neighborhood your best bet is to contact a Rose & Womble REALTOR® who can perform a competitive market analysis.