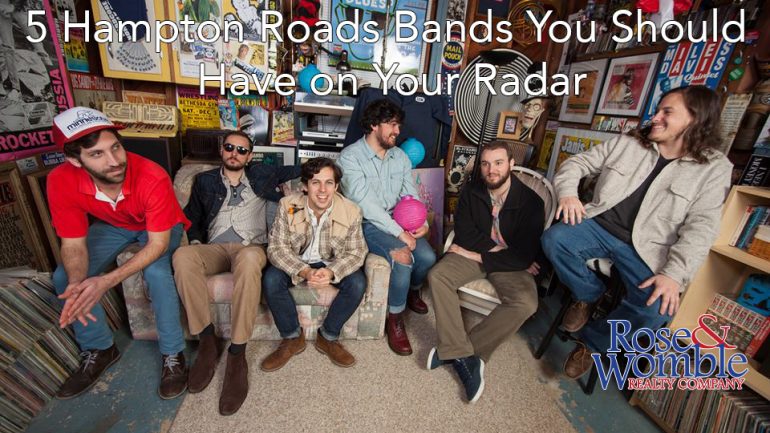 5 Hampton Roads Bands You Should Have on Your Radar

Hey Everyone! This is Josh Coplon from LAVA Presents. I spend just about all of my time listening to music, both recorded and live.

Since 2014 I’ve been an active member of our music community in Hampton Roads and have worked with dozens of local and regional bands. Hampton Roads has a very diverse and unique music scene and it’s exciting to see how things change or come and go over time.

Below are just a few of many bands in Hampton Roads that you should have on your radar:

What is not to love? The Bennett Wales and the Relief album is filled with high energy rock songs that cover a lot of territory. Their first single, “Dodgy,” is something that you could hear on AAA radio and may end up singing along to it the rest of the day. My personal favorite, “To All Relations,” has an edge to it and goes in and out of different time signatures throughout the song. It doesn’t stop there; Bennett’s powerful voice has a natural folky grit to it that adds so much to all of their songs. Although the band is relatively new on the scene, they are full of Hampton Roads music veterans and off to a great start.

Every time I see Berries they are better than the time before and they are all having fun. The band’s frontman, Chris Ledbury, released an album in 2014 but it wasn’t until 2016 that he assembled a band and they played their first show. They are clearly putting in the work and I am sure sooner than later will have some new material out, but who’s to say. All of Berries can sometimes be found backing another local staple, seamonster, or more recently a new side project called Carnival Bird. They also happen to be one of the only bands I’ve heard that reminds me of Youth Lagoon!

Check out their whole album below.

I saw Ladada on April 14, 2015 for the first time and immediately knew that they had it. Their last EP, “Hi-Five,” came out in April 2016 and has remained on constant rotation in my car’s CD player since… sometimes never leaving the CD player for weeks at a time, because it’s seriously that good. They have been pretty quiet for the last couple of months while they’ve been finishing up their new CD, but I can confirm that it has been worth the wait and is going to take everyone by storm. Their live shows are relentless and it’s clear they are having fun, that’s what it’s all about.

Give “Roll Back” a listen and be on the look-out for a new album coming later this year!

Shormey is one to watch out for. Shormey blends R&B/Indie in her own unique way; she performs solo live and already has an excellent stage show. I caught one of her first performances ever last year at Charlie’s and was so impressed with how well she delivered all of her songs and how much promise she shows. Maybe it’s one of her originals that will catch your attention, like “Party Down” (below) or her cover of Mac DeMarco’s “No Other Heart.”

Regardless, I’m looking forward to what comes next from Shormey and seeing where her music goes.

Listen to “Party Down” here:

It’s no secret that I am a Super Doppler fan. Our professional friendship goes back over 10 years and they never cease to amaze me. Pulling from influences both new and old, their music appeals to a wide audience and they can definitely get a crowd going. Most recently they recorded a series of tracks and are releasing them individually under the name “Super Secret Singles Club” – check them out below in addition to their full length, “Moonlight Anthems” that came out this past June. They recently returned from SXSW where Jambase.com listed them as one of the top sets of SXSW, which features 5000+ bands. You can catch them on April 6th when they kick of Downtown Norfolk’s First Friday series at the TCC Plaza.